With Passion - What We See When We Shut Our Eyes 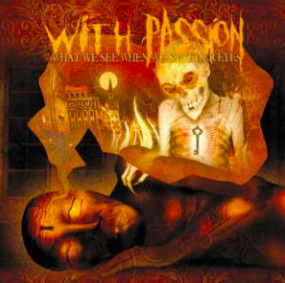 Artist: With Passion
Release: What We See When We Shut Our Eyes

Torn away from life
A curse all in itself
A vision resurfaced, a struggle outlawed by the odds
When awakening from slumber all sorts of tragedy unfold
Not even barricades can hold back the suffering when one’s old voice revisits

2. Through The Smoke Lies A Path

Behold, last sunset with no horses to remain
A saddle left behind
In the company of the sands
Embark alone into the night
A lone horseback, one will ride
Entombed to eternity against the winds and the sands

3. What We See When We Shut Our Eyes

It is a beast that he chases, that chases him
Motion to a moment of stillness
Silence, the flakes kiss his lips, and graze the lashes
Wind shears west to east
White blankets, a breath is taken
Trees are lines between these lines

Limbs have been broken
They still dangle limply in the wind
Shadows play with what they have
The branches give under the weight of it all
He looks again, and there’s another set of prints

It’s gaining speed and so shall he
He never turns back once
He knows if he does he will be caught
For this, he has never seen it
And pray he never will

Most are told to stay awake
In slumber, will you depart
Some men will sail out to sea to feed the endless hunger
A maiden’s voice will carry on reminding him of a past

Shores surround
The black night’s water silences the mightiest of screams
Torn to shreds by her song, leaving only one left
Luring men to vessels, set out to embrace enchanted seas

When asked of happenings, their hands would tremble
It is not for the blade to protect
It is the name engraved on the handle
A chest holds the names in no particular order
Ask why they were taken
One was left to send the rest out to sea

Turn clocks back, forwards
It matters no more
The rise and the fall of our blessed sun

Let my words ring out in a period of unholy worship
I am the voice of millions
Confined in solitude
Cast me down, down you shall
For I will not sow away
No matter the cost

Offerings of silence
Burn my books in the town square
Washed over these children’s minds
Within lies force-fed since birth
Will their dying days harness the truth about me?

I am granted a second coming through an innocent frame
I shall burn the homes of those who have abandoned me because of my beliefs
Now their families shall suffer as I have
Men, women and children for those who have betrayed me
They will feel only as I will never forget

Five set out to ride again
When asked where our home lies, we answer nowhere
We answer everywhere
Others have journeyed by our side yet they ride no longer
These poor souls lie in unmarked graves leaving no legacy
But it is the fate that they choose
Cold bodies have nothing left to lose
Those who remain stand to lose much more

Continued onward to foreign lands
Sometimes we go hungry
Sometimes we become stranded
Forever we remain filthy and poor
Who would want this?
We need this
How shall we be remembered?
If remembered at all
I’d rather die with my axe in my hand
Than go to my grave as less of a man