The Chasm - The Spell Of Retribution 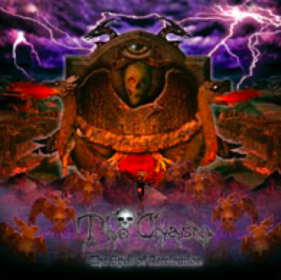 Artist: The Chasm
Release: The Spell Of Retribution

1. From the Curse A Scourge

This one, one of the most engaging sagas
It is a recollection of perseverance and omens
Of hypnotising protocol and whimsical chivalry
Suggesting spaceless landscapes and enshrined memories
For the migration to the desolated lands

Menaced too by the extinction, the greatest and rawest of all
Shattered, fragmented, but always with face towards the sun
The dying one, the fifth of the purifiers
The plan for this curse, the avenging dawn bringer

Heraldic colossus, my iron will on fire
Burning the already charred mists of imperfection
As the summoning grows in defeat
It radiates ectoplasm from the wraiths
This, the omnipotent codex…
Symbols and cryptic annotations of the past

Cast in pieces of liquid wrath
The oblivion, the warning of a serenade
So deranged, the decay of my wounds
Scars of a lost reflective shadow
Once in fury, forever in grief
Once in sorrow, funeral is embraced

But how to overcome the pure idea of being trapped, conqueror…
As I reflect about the crushed age of memories gone
As I recall the cathartic frontier once my soul passed…

Vociferations and imprecations
The discouraged cry for my departed rendering, warlord…
The reaction was futile
The commanders and scathers gathered for the privilege of revenge
To kill some very feeble forms of pathetic rage

They perished in agony and ecstasy
For their ultimate punishment, our punishment to their misery
We judge those who once perverted the core

Perdition and no forgiveness, final destiny and fate
A farewell to the temple that ruled the empire
Commanding in pain, I have returned…

I have taken the torch, enforcing the mirror of destiny
With the fear of the fallen ones, with black eyes of mournful blood
Yes, decimate and reconstruct

Apocalypse of inner war, in this soil of dried blood paths
Through the tongues of the giants
My sceptre has spoken, and if I feel the future
I see the final victory
But in the end, nobody has won…
Decimate, reconstruct…

And as the lights go black
And the feeble scream in fear, sorrow
I tell the whole valley that my hammer has become the ruler
Misfortune for the perished ones
Because I have manifested my intervention

The blasting echoes of a real perception
A virtue of those who have perished
And for their everlasting dominance I sealed my fate
A will so strong it vanishes the damnation
Yes, the power to reign, to dominate again

In fury and in honour, through my eyes I seek the lost torch
Visions of my inner conflictuality, joined by the birth of mourning
Blood-red sun bathed crypts of abysmal chaos
Since the early stages of this defined retribution
Never surrender, and fight ’til the end

So we walk in grief, but we march in victory
Because this destiny is my own creation
Failure is unknown, triumph is the all
Hammering the last nails of their fragmented coffins
A symbol of their own impending defeat
Rebuilding the fortress…

6. Retribution Of The Lost Years (I The Pathfinder III)

And once I walked in the deadly path
And once I drifted below the crisp infidel winds
There was pestilence and rain made of tears
A coven of hunters and king-priest
And a hollow structure of fallen dreams
And megalomania infects the crypts, of my reign of despair

The beast within, the warm breath of my inner demons
Corrosion of the last delusion
Infra-world and infra-fate
I speak to you my elder ancestry

In the realm of the warriors of the underworld
All disciples betrayed by the filth
Forever changed, scarred by deep tragedy
Discovered an unfathomable call
It was like a singing flame, the moment of the torment
And it went through them like lighting through dark-storm clouds

Contamination of their will
Aspirations of the quincunx, conjuring
Travelling between the layers of the universe
The world trees deciphering the codex
Invoking and conjuring the fourth cataclysm
And omnipotent and multiform, the thorns of my soul

For I was the iconoclast, the bringer of retribution
Destroyer of their feeble ideals
For I’m the oppressor
Conjurer of their demise
Rebellious, unmerciful
Mourning the death of my beginning…

8. The Eclipse - Monument To The Empire I - Sentence And Burden II - The Voyage III - The Restitution

I)
Sentence and burden
In the eye of the revolutionary storm
My blazing strength is the vortex, creator of millennium chaos
And of voices of honour and disgrace
There are no words to describe this sorrow

To a place of no return, to a time of awakening and broken prosperity
To a fountain of weathered truth, and utter melancholia
This is the way of this mania, a clamour for the apocalyptic direction

9. Remains Of The Covenant

And the strangest yet strongest phase of this infra-terrenial journey
Has been put into the final crease
With uniform eternity, depiction of the failing shadows
Description of my inner vision, but I choose to suffer
I choose to reign, complete in fragmented time spaces
No forgiveness…

For the eternal cycle of potential spiritual extermination is about to commence
Yes, walking again, lonely in this path
In a circle of no return, in the hall of justice forgotten
As the energies around my temple have progressed
Discerning what this procreation has intended
And continues to intend, scar by scar, epic by epic

To a portal to the bravery of my thoughts
As we avenge all the misery planted by the ignorance of the scum
And as we cast them into catastrophic exile
My faded memories scarred, asked myself
Are we all dead?
Is everything lost?
And the price we paid, it was worth it?
A torrid and mesmerising silence was the answer