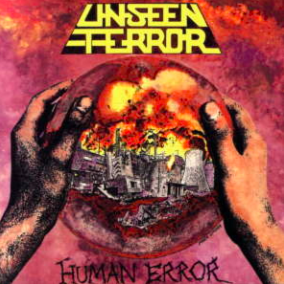 Decaying exposure, severe decomposure
Unseen but there, death in the air

This could happen when we least expect
But who’ll bear the guilt for a million deaths?

Barren wasteland, deadly silent, nothing left
Scorched remains of fallen buildings, scenes of death
Those that lived through this madness still remember
The fateful day when Hiroshima was burnt to embers

So selfish is the human race
That barriers are caused in life
Prejudice breeds frequently
Blind ingorance and thoughts of hate – but why?

People should stop and think about the feelings of others
There is no second class, we are all the same

Hate because of someone’s colour
Can’t you see some sense?
Blindness, today’s world’s dividing lines
Should be broken to make a better world today

Some will never learn how to show concern
Sheer narrow-mindedess, just keep it to yourself

4. Death Sentence (Of The Innocent)

Death sentence of the innocent

Without warning, it happens so quick
Falling like flies in a blood bath of pain
No explanation why terrorists have struck
Undecipherable perversions of the insane

Death sentence of the innocent

What motivates a man to do this?
Evil dwells in many minds
It’ll always be a mystery, man’s unpredictability

Corruption of the human race
Don’t fall into the trap
It’ll always be a mystery, man’s unpredictability

Block your minds to what we say
So one-sided, you’ll never change
Sarcastic about our ways and views
But intelligence will soon win through

Too much goes on in this world
We should stick together, not fight each other
We hope and pray the time will come
When you think like us and join as one

Abolish all your ignorant thoughts now!

Behind closed doors, secrets told
Deals are struck and bargains broke
As darkness strikes, a victim dies
Cover up a bunch of lies
Unanswered questions, hidden truth
Broken promises, no real proof
Freedom of speech doesn’t have a say
Uninformed the price we pay

Mass unemployment a problem of today
Inflation on the increase, but do we have a say?
Wealth divides majority, money hides the truth
For a price, a deal is struck, abusive to our youth

Victims slaughtered, maimed in blood
Sacrificed for power and all it does
Trails of mutilation line their path
Decades of madness, expulsion on wrath

Decades of slaughter
Reign in torture

Positions of interest, message made clear
Kill or be killed, fear or be feared
A rise toward master of all families
But tables can turn without no mercy

Decades of slaughter
Reign in torture

Victims slaughtered, maimed in blood
Sacrificed for power and all it does
A rise toward master of all families
But tables can turn without no mercy

Termination
Smell of brimstone fills the air
A stalemate war, no lives are spared

Gone through life hating others
They thought different, you couldn’t be bothered
You didn’t care about yourself
You just misused and abused your health
Now you’re dead and you can’t be saved
You’ll rot forever in a shallow grave

Monday morning sun is dawning
His eyes are open, Garfield’s yawning
As our cat just ends his dream
Here comes Odie on the scene

Seeing people waste away, paying for death
Heroin the only thing that they have left

It’s up to the individual to think and make a choice
Is it really worth the sorrow that soon will follow?

A cry for help, blame yourself
Already knowing you’d ruin your health

Don’t understand what you’re fighting for
Soon you’ll feel the pain of war
Can’t you see they’re human beings?
No remorse, no feelings

So many problems in this world
We can’t avoid those cries unheard
Can’t you see what others saw?
Our only enemy is war

Will we learn?
Can’t we learn?

Our chances seem to be fading fast
I wonder how long we will last
Why are you so fucking blind?
It isn’t hard to use our minds

Will we learn?
Can’t we learn?

Slowly burning, spewing smoke, smell of death
Crackling bones, flames searing through the flesh
Soon collapsing fragments is all that is left
Vision clears to reveal a skinless mess

Within seconds of annihilation
A funeral pyre of radiation

Smoke is gone, embers pop up as if alive
Fire has claimed another victim in its flames
Carbon covered, smouldered corpse diminishes
Embers die to leave the gutted charred remains

Slowly burning, spewing smoke, smell of death
Crackling bones, flames searing through the flesh
Soon collapsing, fragments is all that is left
Vision clears to reveal a skinless mess

Within seconds of annihilation
A funeral pyre of radiation

I scream against a wall
What’s happening to me?
A state of depression
That lasts beyond eternity

On the verge of suicide
Can I be saved?
My own worst enemy
An emotional slave

One Sunday evening, when Jon was asleep
Our friend went a-prowling for something to eat
When he found nothing, he wasn’t too pleased
He went on a rampage to put mind at ease

Into Jon’s bedroom he silently crept
Shredded the curtains then jumped on the bed
His owner went crazy at what he had done
But Garfield said, smiling, ”Man, that was fun!”