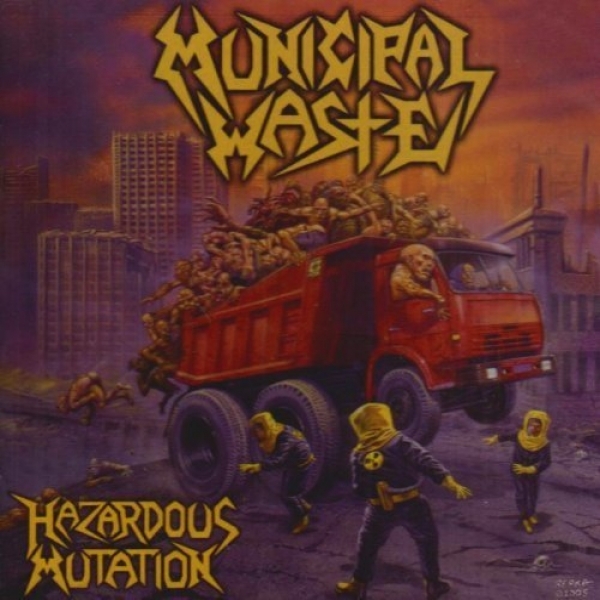 In his walls of madness, deep inside his bran
The Deathripper’s calling out to end his pain
The punishment, the aftermath
The final blow, the last laugh

He’s holding too little of the sanity he grasps
A grisly plot is made
Now locked up in a cage
A lion pacing back and forth, holding back his rage

His clenched fist only shows
His hatred as it grows

Wise up and see your fate
Witness the mechanical advance
Rise up, but it’s too late
You should have stood up when you had the chance

But now the world’s a living hell
The stench of death is all you smell
The ground is scorched
The air is black
The sound of your neck being snapped
What was on earth worth fighting for?
Now destroyed by the corporate whore
An overload of greed and wealth
Who’s gonna save them from themselves?

The time has come
For all your leaders to die
(Die!)
Electrified hate
Your blood and their circuits will fry

Antarctica, Winter, 1982
Research was going steady and there was nothing much to do
In the distance a lone wolf flees
But no one knows the carnage that this animal will bring

Violence unfolds
Assaulted by Norwegian guests
They’ll have to die like all the rest
Searching through snow
Discovering the frozen corpse of something that’s not of this earth
The creature comes forth
An evil makes its presence known, attempting to create a clone
Nowhere to go
And something grim is at hand somewhere in this arctic land

The Thing, no one knows the hell it will bring
It’s got you from the inside, it’s taking over your life
Intentions so unexplained, until it gets a hold of your brain
Hiding ’til the damage is done, kill ’em off one by one

The Thing, no one knows the hell it will bring
It’s got you from the inside, it’s taking over your life
Intentions so unexplained, until it gets a hold of your brain
Hiding ’til the damage is done, kill ’em off one by one

Who to trust, they’ll never know
And nothing can contain a creature of the unexplained
Half the crew’s dead, more to go
Somehow it’s got to stop and now McReady’s getting pissed off
Now there’s nothing left to do
Discovering who’s human is what this final test will prove
Deadly results are what this test brings
But it’s the final hope to unveil this gruesome being

Violence unfolds
The test was the solution, now it’s time for execution
Searching through snow
And Blair’s the last thing left, he’ll fight until his dying breath
The creature comes forth
But this will be the final clash, kills it with a giant blast
Nowhere to go
Our hero’s fate is finally sealed
After all, The Thing is killed

Nothing exciting, no news to report
This is my weekend and I’m fucking bored
Used all my patience, there’s no more to give
If I can’t fuck shit up, I don’t wanna live

Hop curbs, sideswipe
Oops, there went our tail pipe
Only went a block away
This car’s luck just ran out today
Sliding through stop signs
Seeing double, going blind
Followed by about ten cops
I’ll finally get to be on Fox

I’m sitting talking to myself
I look around, there’s no one else
My shirt is soaked with my own drool
I thought these drugs were going to rule
As my heart pumps and my head spins
I think it’s coming back again

Instead of finding peace of mind
I’m losing it in record time
It feels like I’m dreaming
I’m losing all feeling
How long will this last?

Far beyond thrashed
The seconds seem longer
The drugs become stronger
As I slip away from reality
Scared to death, will it come soon?

I’m locked inside this bathroom
Claw my skin, pull my hair out
Makes no noise when I try to shout
Searching for feeling, drifting away
I’m strapped in a K-hole and can’t find my way!

Locked inside a padded room and fed all my food with a spoon
My arms are strapped, my brain is fried
I’m fucking trapped inside my mind!
They’ve tried their therapy to help with my affliction
I’m sentenced to a life with my accelerated vision

Nothing left to do
I can’t find a way back
It spins and it spins until it all turns black
My mind is a cell
Trapped in a K-hole!

6. Guilty Of Being Tight

Tension building, your dead starts to swell
Thinking of ways to send them to hell
Stepped on so coldly, it’s just not right
They’re all just jealous ’cause you’re fucking tight!

Now sit back for a second, just take a deep breath
From contemplating ways to incite your early death
Instead of thinking about your problems and all the things you lack
You gotta figure out a way to get those fuckers back!

Stop mulling through your problems, don’t drink the pain away
Don’t use it for a crutch to start acting really lame
You need to get up from your slump and the things you think you lack
You gotta figure out a way to get those fuckers back!

Just because you’re different, they can’t comprehend
Betrayed by the ones disguised as our friends
Dont take their shit, stand up for your fight
They all just hate you cause you’re fucking tight!

We are the speed metal punks
Pushed to the limits too much
We’re the unstoppable force
Now it’s the time to erupt!

We are the army of drunks
Our weapons are set to destruct
We’ve come to punish all foes
Now it’s our time to erupt!

No longer underneath the streets
We’ll infiltrate until you’re weak
We’ll strike upon what you hold dear
The Waste has come, the end is near

A deadly reaction sets forth
A hazardous mutation to end all creation is born
Pitiless fluid corroding like acid
Flesh torn!
Those skins unprotected will soon be infected

In a panic, he ran screaming from his wife and kids
The image burned into his mind of their corroded limbs
As the smell of rotting flesh begins to attract flies
They knew that they could never return to their normal lives

I got some serious troubles
I have some issues
I have a big obsession
And it’s for killing you!

I want to run you over
I want to stab your throat
I want you in some cement shoes
Getting thrown off of a boat!

Step right up
For games and prizes
For real cool rides
And a fun safe time
So I did
Not knowing that the park
Hidden behind the tall fences and red curtains
Was a fate worse than death itself!

So I stepped right up
As fear took hold
My heart stopped and my blood ran cold!
Running for your life

Run to find an exit
Weaving through the dark
The freak show has taken over this park!

On the lonesome highway the roadways are slick
The temperature’s dropping, the fog is too thick
The chill in the air mixed with oil in the lane
It’s nature’s creation to cause you great pain

So on your next journey, just heed my advice
That shit killed Cliff Burton, beware of black ice

Sweat pours down my face
Laying in the strangest place
Body aches with constant pain
Blurred thoughts fill my brain
Legs too sore to even walk
Throats dry, can’t talk
A modern day Jekyll and Hyde
Throwing up hating life

Once again, it’s taken its hold over me!

Kicking people in the balls
Trying to break every law
My friend said I jumped through a wall!
Rolling around in broken glass
Falling down, kicking ass
Forgotten memories of the past

Don’t blame me, I was just bored
Blame it on the drinks that the bartender poured
14 shots, some beer as a chaser
Then he followed it up with a mind eraser
Real fucked up’s the only way to react
Then run around the street like you’re a maniac

It was my only choice, it’s not my fault
Now I’ll spend the next day trying to collect my thoughts

Don’t blame me I was just bored
Blame it on the drinks that the bartender poured
14 shots, some beer as a chaser
Then he followed it up with a mind eraser
Real fucked up’s the only way to react
Then run around the street like you’re a maniac

It was my only choice, it’s not my fault
Now ‘Ill spend the next day trying to collect my thoughts

You thought that you’d have so much fun surfing with your bros
But in the water waits a terror that nobody knows
Without a fear you rip around, stoked on the killer waves
But to dine on your flesh’s what this monster craves

Panic on the beach, there’s nothing the lifeguard can do
The crimson red of your blood stains the ocean’s blue
You never thought that you could be so low on the food chain
You’re left a floating piece of meat in agonising pain

The meal is done, your body’s gone, they only find an arm
A terrible reminder that you’re never safe from harm
Back into the depths, its stomach full up from the deadly feast
Remorseless killer digests the decreased

When the water’s not shallow, you’re bound to get swallowed
As the hunger for your flesh grows more by the hour
Was it a good idea to go for a swim
Since they’ll never find your body in once piece again?

Out in the water!
The terror shark!

14. The Thrashin Of Christ

Come to save our souls you say, or are we just prey?
Should we serve a lie absurd called the holy word
Jesus Christ, you’re out of luck
Let’s thrash that fuck!

Can’t they see what it’s come to be?
Preachers drowning in a sea of pity
But when we rise from the cloud of lies
We’ll crush the church and take back our lives

Hide behind the cross telling lies of the absurd
How many altar boys are fucked before your time is served
How often do you hear of some pastors sudden fall from grace?

Crying on TV with smeared make up running down his face
More and more evidence is piling up
That organised religion’s just a den for the corrupt!

Another Sunday, I’m battered and spent
So many things happened that I might regret
A weekly occurrence, what’s strange about that?
But it seems like to me there’s a pain in my neck

Aches when I turn and when I look up
It feels like my neck’s been hit by a truck
Ears are still ringing
Brains far from sober
What can I do to stop this bangover?
I rocked too hard and now I’m suffering

Fist in the air
Whirlwind of hair
Thrash music ringing through your ears
These things all pass and here I lay
Not going out for shit today!