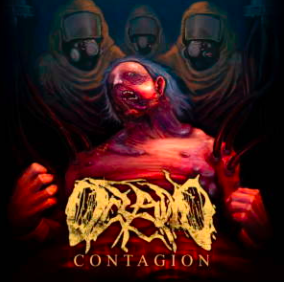 Replacing God, human hands conceive and contort a vile creation
A fatal form is about to be born
A curse that’s birthed with a purpose
Fear is an infallible distraction when populations confirm
Propaganda blinds them all while before their eyes
The blueprint to a deceptive design unfolds

Silent, with no trace of its presence and created to destroy

Sharing in these repulsive transformations
Your family watches in horror as the symptoms take hold
Vomit spews and internal acids burn your throat
Blood flows from every orifice, your body’s virulently overtaken

The vile scent of death has crept unto your doorstep
Intruded your sensory glands, stimulating a thirst for further investigation
An urge you should never have acted upon

Oblivious to the perils you’ve entered
Presumed to be dead, the infected are resurrected

The starving horde overtakes you
Teeth and nails desperately serrate through delicate flesh
Their abuse rips open fresh wounds, exposing your blood to their hazardous pathogens

With each person infected, the contagion grows stronger

Upon first sight of the infected, they fall victimised to gunfire
In an emotionless disposal of life, this has become another inhumane display of execution

You awake to the putrid stench of decomposing flesh
Welcome to oblivion
Do not pray, for salvation won’t come
Your saviour does not dwell in this place

Showing symptoms of the afflicted ones
You’re forcibly secluded from the general populous
Restrained, sedated, and internally tested
Archaic instruments have penetrated flesh

Painfully extracting blood in search of virulent, crimson spray stains the walls
Their draining torture device induces seizure
Vital signs are weakened
Sickness flows from every artery
And there is no hope of survival for the diseased

There is no hope for survival
Sickness flows from every artery

Embrace oblivion
You are the bastard dying children of this race

As migraines become overwhelming, perception is rendered contorted
Mentally you’ve grown unstable
Devoid of human emotion
Something has burrowed into your psyche
Forcing you to lose touch with your own self
A transformation is apparent
You’re becoming what was once unimaginable

Recognising the illness which threatens your body
You attempt to repress a horrid envisionment
That of your ill-fate, and the torment you’ll face

As one of the infected, accept the fact that you’re damned

The apprehensive conditions of our nation
Is now expunged within human nature.
Surrender severely subliminal,
Upon the mercy of apparitions
Whom expressed little incentive deliberation.
In exchange for their beliefs do merely exist.
Below their pedestal of deceit,
Provided a mental solitude for extract from their design.
The outside is truly like a fine minute of this life.
Do you decide to fight in resistance?
Do you dare defy what subsequent exist in confinement?

Infiltrating defenses and evolving with every strand, the contagion shall continue to spread

Witness a greater vision
To purify the nation of its ailments, human rights are compromised
Marshal law is put in effect to suppress public action and freedom of speech
Politics swiftly evolve into a fascist tyranny

Infiltrating defenses and evolving with every strand, the contagion shall continue to spread
This is a greater vision, a long awaited master plan
Which will begin and end in your oppression

With retinas exposed towards an empty sky, the majority relies on religion
Citing God as a scapegoat for this unrelenting plight
Such devastation is not divine
The corruptive hands of our leaders orchestrated their own nations decline

Deceivers, transposing fear into a mechanism to delude their fraud
Such devastation is not divine
Don’t believe their lies
This plague was weaponized!

Such devastation is not divine
These are lies

Survival was never the outcome expected

You are chosen, the first casualty to demonstrate its bodily affliction

Suspended from appendages, your spinal cord is punctured
The virulent’s injected in an agonizing procedure

Your body is disfigured

This experience continues to worsen as infection fully takes over

Subjective to their sadistic experiments, you are transformed into a sight of abomination

The presence of infestation must be eliminated at any price

Purging a curse which they created
To coercively transform the populous into slaves
The final goal is to depopulate, and a murderous cleansation process begins

Immersed in filth, single file and blind-folded
The infected are imprisoned in awaitance of death
Instantaneous as contamination, they are viciously slain by a barrage of ammunition

Each blood-soaked corpse is gutted
Innards disgorged, scraped barren for experimentation
Empty and left for a massive stockpile to form, the rotted corpses are torched
Bodies carefully cast aflame
Until the soil is littered with the steaming white ash of their remains

Were your plans to overthrow?
I’ll let you experience struggle
Ignoring suggestive influence, your intellect has merely lead you to martyrdom
Which shall serve as a deterrent for those who chose to follow

Now face the repercussions of these acts

Tortured, nearly beaten to death
Your tongue is severed from your mouth
A reminder that there’s no freedom of speech anymore
As your soul bleeds out, your body shall be left to rot
And the rodents to feed upon your corpse

Silence is simply that easy