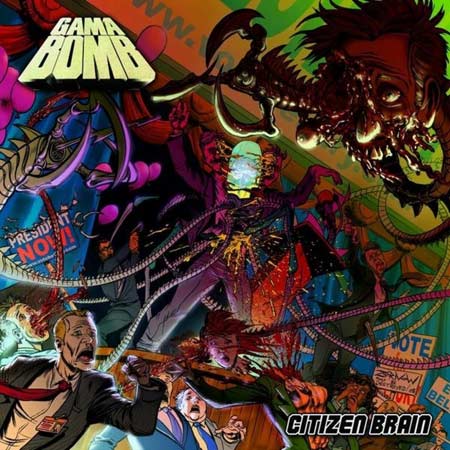 Lusting for treasure and killing for wealth
Enslaving the natives and toasting your health
Drums of the voodoo gods are sounding out in the swamp
Resurrection ritual, it’s you that they want
Once you look into their eyes you’ll soon become a ghoul of gore
Zombies teach cannibals to be afraid
They’re cruel like never before

Who what would have thought my hand could do that
Gave me a wedgie, set fire to my flat
They start up quiet but end up talking loud
My hands grab the steering wheel, aims for a crowd
Horrorsome demons trapped within
Bound by chromium, consumed by sin

There’s a vortex in the fridge, the food flies about
Throttled by savages, I cannot get out
An unholy choir chants in my mind
Exposing predictions to destruct mankind

Subway, city, violence, cage
Thriving on the streets of rage

My car, street fighter, wheelchair, pipe knife, glazed ham, trash can, Molotov, Jenny
Get the fuck up out of that chair
It’s you I’m battering now
Armies of the night combined can’t stop revenge somehow
A moustache-wielding mayor with two-fisted slamming power
To save my daughter and eat the hams is the order of the hour

Napoleon Blownapart, 1610
Martin Luther, they did it again
World War Two, 1945
Tourists from the future, they did not survive Panzers at Hastings 1066
We fought with lasers, they fought with sticks
Nuking the Romans in 238
Enslaving the cavemen in times before date

A knight with an Uzi, that makes no sense
With mammoths and Mongols there is no defence
Hitler meets Caesar, Stalin and Nero
They’re building a robot, so don’t be a hero

The city is stunned, a madman is loose
He’s brandishing a mallet for malleting heads
Victims are mounting in alleys and lanes
Where are the police now this madman is loose?

Striking by night in the canyons of town
Attacked in the back, he brings the sledge down
Being mashed up by a bloodthirsty clown
A mentally mad killer of murderous renown

I drive victims into the ground like nails into a bit of wood
Every day I’m on the news but none of them has understood
I watch TV, what do I see?
A useless world that’s full of shit
I like my job, I’m good with tools
I’ll fix society bit by bit

The city is stunned, a hammer is slammed
Swinging from a string from a blood-soaked hand
Victims at random, smacked for thrill
Madness without pattern that’s continuing still

Thrashing around, banging your head
Wrecking your room, there’s sick on the bed
So stick on destruction, crack open a beer
Your deafened-up neighbours are lining up to sue you

I’m shackled to these bullet belts for all eternity
The warden laughs in his gasmask as I scream in search of sanity
Guilty as fuck, it’s sentencing day
Sent to the slammer, attacked by the gays

Sticked up like a kipper, goodbye to my wife
I’m going down for a hundreds times life
I’m peeling potatoes but I’m carving a key
A life washing dishes, that’s insanity

The warden is a bastard, my cell’s a shoebox
I hope my dinghy won’t get dashed on the rocks

Back from the grave, down to the pub
They always, always come back
They crave for a brew to wash down your brains
An eight percent grey matter sludge

They eat the living but drink their tins
Fermenting in the kegs the army kept them in
Watch your beers, the zombies are about
They’re being touchy-feely and staring at your brain

Wake up at six, struck by beer cancer
Time for a puke out my ass, and a good cry
Zombie party wrecked my flat
I’ll piss in the graveyard tonight

Riding the motorway to whence I go
Hell is the next stop with this cargo of souls
Only the damned are in my boot
Speed metal, the floor to my foot
My iron wheels are crushing steel
The firey engine screams doom
Nazis flee and go screaming to hell
Where this highway leads

In a steel beast that lives underground
A despot, a madman, they plot
The eye of the Technodrome, the all-seeing eye
Prepares for the coming attack

Banished to Dimension X
They swore they would return
Rock soldiers, mutants, kill as one
Living ball of steel rolling through the town
Hypnotising eye returns from ‘neath the ground
Limit of our powers surely soon we’ll find
Terror of the technodrome shafts us from behind

There’s a vortex in the sky, they’ll drain out the power
And plunge our world to black
Behind the plan, a brain with a face
Prepares the final attack

Sai and swords, bo and flails cannot stop them this time
Return of the fly, fight, fly or die
Drive them back to hell

We bang ’til death and lay siege to the pub
With tankards and pints in the air
Straight edgers worst fears, we’re addicted to beers
Though whiskey and cider get their share
Back in the day when the beer fuelled thrash
The tempo of the metal was high
But take out the cans and euthanasia is planned
A force of habit left you high and dry

We’re thrash, thrash to the core
Our love for cans we can’t ignore
Your turn to shotgun
Thrashoholic means booze for everyone

We drink our pints, then order some tins
When they kick us out of the pub
Then back at due place we’ll draw cocks on your face if you pass out on the floor

13. In The Court Of General Zod

Trapped in a mirror, freed by a bomb
To rule over Earth with sadistic aplomb
Moon villainess rules by his side
A brute force of evil serves in mute pride
With lofty ideas, dictator from space
Using his lasers, the past he’ll erase

Taken by force, a world that’s not theirs
You’ll kneel before them and one day your heirs
Done in the name of a cruel new god
One way to worship, to kneel

Concentrated lasers, very spooky in his eyes
An alien salute that blows a chopper from the skies
Storming on the White House, his beard for all to see
He laughs at their defences as he puts them on their knees
He feeds on the sunlight stealing its power
Gloating his madness in our darkest hour

Why do you say these things, when you know I will kill you for it?

Cruel cold intelligence beyond what humans know
Seeking out a power source among the northern snow
Condemned by the council but ruling once again
Aloof to our suffering in the reign of supermen
Insidious treason, a fascistic plot
Get on your knees, the one hope we’ve got

We fight them on the sea and land
Death-ray turns your face to sand
To wipe the earth of humans clean
They are evil, short, green

Thrash titans of yesteryear, they have failed us with their recent piss
We reject their progressive dross, call it rot that it truly is
Legions of thrashers with nothing to thrash to on the city streets

Put on your bullet belt
Sonic death your face will melt
Back to reign, here’s to say
Thrash your brains or go away