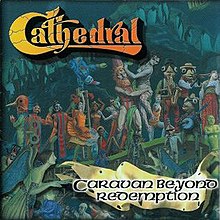 Magic lady of the snake cult stands
High on the voodoo mountain
Society does the congo dance to the serpent queen’s chanting
Baby, feel the demons burning
Hypnotised hostile world
To her presence is falling

As far away as Jupiter and way beyond its thirteen moons
Solar system of Lucifer in a ritual of cosmic doom
Baby, Papa Nebo is callin
Zombie rise to the voodoo cries
From your mortal tomb awaken

Supergod of evil casting his spell on the Earth
Beware of clockwork devils spreading the word
Don’t let them robots fool you about their man in the sky
‘Cos in their quest to rule our world, we are witches at the trial

Wars of science fiction now become reality
As Ultraman versus Robochrist our time is nigh
So use your robot detector
Shoot right through their disguise
Deactivate their master plan, we gotta see those tyrants die

Listen while I tell ya, each and every one
About the state our planet’s in and what should be done
Wheels of freedom turning backwards on themselves
Liberty is burning in this hell, this cosmic cell

Freedom for the people, humanity and all mankind
Liberate your soul and mind
It’s waiting for you all to find

But getting it together is what I’m talking about
Ain’t got time to argue, just time to turn it out
Look into the future, just tell me what you see
If we don’t love each other, there’ll be no harmony

Freedom for the people, humanity and all mankind
Liberate your soul and mind
It’s waiting for you all to find

Father of creation, master of this tomb
Universal messiah, motherfucking king of doom
We don’t ask forgiveness for our sins against you Lord
We want retribution for the twisted ways you’ve taught

A tombstone reads ‘Captain Clegg, R.I.P’
Yet still he sails across the phantom seas
Such a holy man for all of you to see
The village vicar, his secret identity

Frightened people fear the evil
In their leader Captain Clegg

He wore the mask of the skeletal creature of night
His oath was terror and blood his battle cry
He was a wanted man who escaped the hangman’s noose
The parish leader, his pirate clergy in the loose

Insane asylum, Planet Earth
The universe has become a hearse
I drove your destiny to your maker
I was your futureworld creator

My wicked eye watched planet burn
I am your master, I am the Earth Messiah

Television parasites
Tune into brainstation satellite
I’m sucking cash from your minds, so empty
Oh how your weakness pleases me

Brainwashed children, from you I feed
I am your master, I am the Earth Messiah

My work is done, now I’ve set you free
I am your master, I am the Earth Messiah

You see the devil smiling through a world of flames
You watch the children running – now tell me who’s to blame?
Deadly forces of evil, casting you under their spell
Deactivate the program before they get your soul, alright!

Starlight walker, step inside your mind transporter
Upon your tongue, a magic ticket to godlike power

On the storm become a rider, a purple sky, it yearns for you
Escape on wings of fire from society melting below
Where spirits and souls are lost in the drudgery of rotation
Climbing the plastic ladder to a vision of security

Starlight walker, a magic ticket reshaped your future
Your spirit flies across the sky in your mind transporter

Starwalker, sky designer, keep searching for blue skies
On the storm you are a rider before the medication dies

Kaleidoscope of desire, you search for eternal ecstasy
Reality fantasiser, keeper of the cosmic key
A trip you took into no return
The insanity lasts forever
Time on earth expires, the hourglass runs out for you

The reaper called around at midnight, baby
He had some bad news for you
A final warning, the cards you’re playing, are turning back on you
You’re living in a high speed world so crazy
Burning out of mental fuel
The ball of fortune is getting cloudy
You gotta see through

You push it up, you pull it down, keep dragging it round and round
Don’t let it crush ya or grind you down
Stop falling to the ground

Keep pushing up, keep pulling down
Keep on dragging it round and round
Don’t let it crush ya
Stop falling down
Get yourself up off the ground

The city is alive with ghouls, baby, who used to be friends with you
But now the living dead are turning their dirty backs on you
The joker in the pack is your last card
Shit, no, you’ve traded that ace for blues
Cold paranoia, no holy water can cleanse this curse from you

I’m sitting here alone in this waxwork palace
I stare at the motionless man with the eyes of Judas
It’s a face I’ve seen before in a distant mental war
Where am I? Where have I come from?

I am Frankenstein
One million years BC
Dinosaurs rule the earth, all for you to see

Museum of mankind, distilled in ghostly silence
This orb no longer turns, as if it never happened
My laboratory has closed, I’m a scientist with all the answers
But where am I? But where do I belong?

I am Frankenstein
One million years DC
Machines now rule the Earth, not for you to see

I’ve played chess against the world
And conquered my own madness
I’ve designed my own plague
Become my own Big Brother
But life still goes on, and all this wealth I own
Amongst the ruins I roam, uncivilised, alone

Walking away behind the mirror of nighttime
I’m coming home
Sailing to you aboard a ship of phantoms
Am I the only one?
Is this a dream, is it a nightmare?
What can I do?
Slipping away, I’m falling from this lifeline
I’m coming home to you

Back from hell again
I can take you there

Walk with me through the dust of paradise, my friend
See my world where the ghosts of life are sent again
Release your soul from this mortal coil of life, my friend
See yourself in the mirror of beginning again
The end